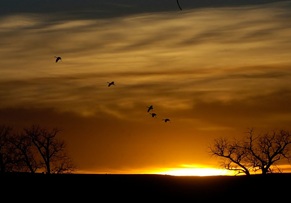 Spring Gathering of Sandhill Cranes along the North Platte at Lewellen

Each March and early April, 20,000 or more greater sandhill cranes gather to rest and refuel along a 15-mile stretch of the North Platte River between Oshkosh and Lake McConaughy before continuing north to nest. While not quite on the scale of the aggregation of half-million lesser sandhill cranes along the Platte in central Nebraska (touted by Roger Tory Peterson is one of the "ten most spectacular wildlife events in North America"), the gathering of cranes near Lewellen is awe-inspiring and not to be missed. Visitors are moved to tears by the sight and sound of thousands of trumpeting cranes descending to their island roosts at dusk and blackening the horizon at fiery dawn.

While watching the cranes, you're likely to see mink or river otters frolicking in the river, white-tailed deer bounding through lush meadows, or wild turkeys skulking through streamside thickets. Clear Creek State Wildlife Area, just a couple of miles downstream from Lewellen, supports tens of thousands of migrating snow geese in early spring and at least 80 species of nesting birds in late spring and summer.

Our favorite place to observe the evening fly-in of the cranes is the old Lewellen bridge, located just a half mile south of town. You can stand on the abutments of the historic bridge and watch the cranes glide by. We often see river otters or mink near the north abutment. At dawn, you can see 5000 or more cranes lift off from their roosts just a few hundred yards east of the main highway bridge. During the day, the cranes gather in corn fields and meadows north of the river. Drive the county roads north of the main highway linking Lewellen to Lemoyne.

By the second week in April, most of the cranes will have flown off toward nesting areas in the northern Rockies, Canada, and Alaska. But the memory of their haunting, 65-million-year-old voices remains in our hearts and keeps us coming back to Lewellen spring after spring. 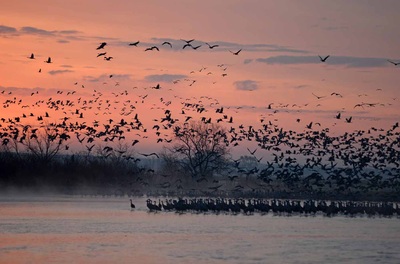 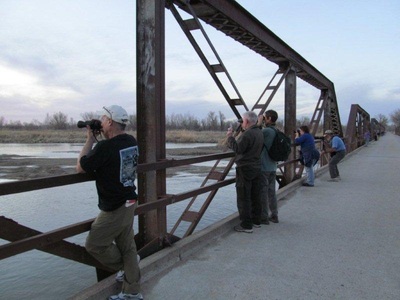 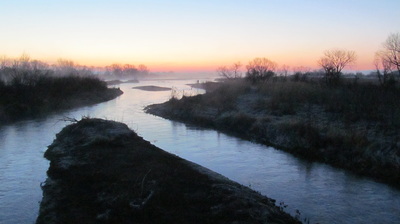 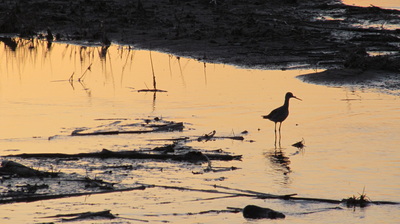 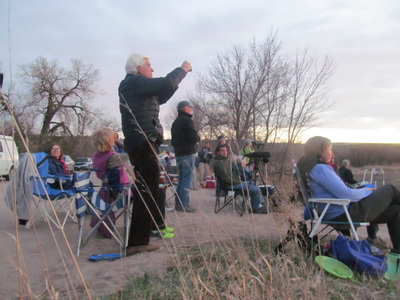 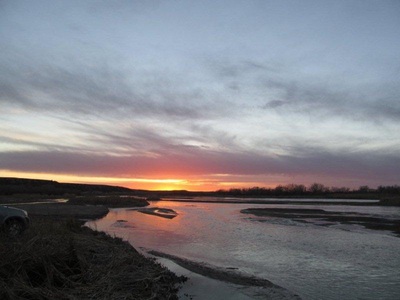 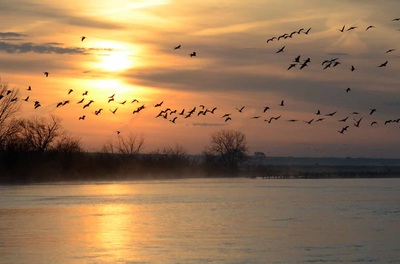 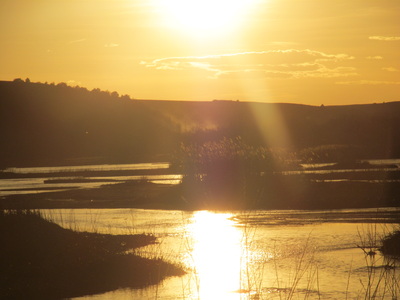 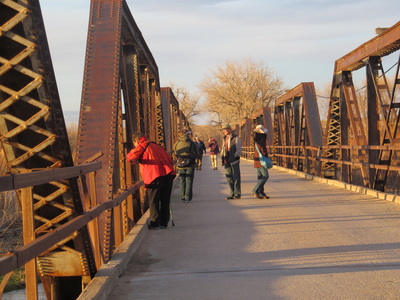 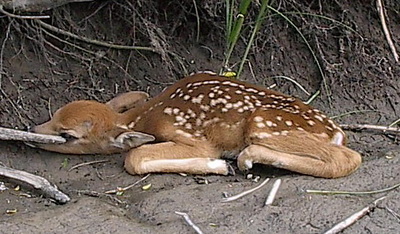 Crescent Lake:  This 45,900-acre refuge is located about 28 miles north of Oshkosh via county roads.  This is one of the great wildlife refuges in America, and it supports a greater bird diversity than any other Nebraska site except the Lake McConaughy area.  However, it is about 30 miles from the nearest source of gas and food and one must plan accordingly. (Closest lodging is Blue Creek Lodge.)
Goose Lake near the headquarters is excellent for Eared Grebes, and both Crescent Lake and Smith Lake have good populations of Western Grebes.  Rush Lake has breeding Ruddy Ducks, Canvasbacks, Redheads and Black crowned Night-Herons.  The area near Border Lake is best for American Avocets, Black-necked Stilts, Cinnamon Teal, Wilson's Phalaropes, White-faced Ibis and other shorebirds attracted to saline water conditions.


Ash Hollow State Historical Park:  This historically interesting park, located 2 miles southeast of Lewellen, has a wide variety of habitats, from exposed rocky bluffs that are used by Great Horned Owls, American Kestrels, and sometimes Prairie Falcons, through grassy wet meadows where Bobolinks and Eastern Meadowlarks are present, to riparian wooded habitats used by Warbling Vireos and other woodland songbirds.  There is also upland grassland, with Blue Grosbeaks and Spotted Towhees in shrubby areas, and scattered yuccas where Field and Grasshopper Sparrows sometimes perch.  A one-mile trail leads from the parking lot off US 26 to Windlass Hill, where Overland Trail wagon ruts are still easily visible.


Clear Creek Wildlife Management Area:  This is one of the state's best birding areas and is located at the west end of Lake McConaughy, south of State Highway 92, about 8 miles east of Lewellen in both Garden and Keith Counties.  Bobolinks and Clark's Grebes nest here and Least Bitterns have been found.  Barn owl nest cavities usually can be seen in the cutbanks at the turnoff from Highway 92 to Clear Creek.