Among the early settlers north of the river who helped establish the Lewellen settlement was D.C. Hooper, who came in 1885.  He built a hand cart and hauled his supplies from Big Springs, walking and pushing his cart.  There wasn't anything sure about mail and supplies in those days.  Such items were freighted from Ogallala or Big Springs.  Until 1891, when a bridge was built at Lewellen, the closest bridge was north of Ogallala.  So, Mr. Hooper did his work the hard way.  He needed to be a good judge of weather, as he camped where nightfall overtook him.

In 1886 Frank Lewellen Started a store and post office in his home for miles east of the present site of Lewellen.  It is evident that the town was named for him.  Mail was brought up from Ogallala.  In fact, much hauling was done from there as the Keith County Bridge near Ogallala gave a much better way than fording the North Platte River.  The situation was remedied somewhat, however, when the bridge was built across the river in Lewellen in 1891 by St. Joseph Bridge and Boiler Company.  The bridge not only made freighting easier and quicker but also encouraged settlement at that point.  The Original Lewellen settlement was located at what is now the southwest corner of town. 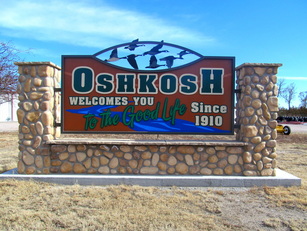 In 1885, five men who lived near St. Paul, Nebraska, heard there were many acres of land which could be leased for ranching out in the Nebraska Panhandle.  The men's names were:  John Robinson, HW Potter, George Kendall, Alfred Gumaer, and Henry Gumaer.  The needed more land for their herds so they drove their cattle and horses from St. Paul to what was then part of Cheyenne County to start their big ranch.  The two Gumaer men were from Oshkosh Wisconsin, so they suggested calling their spread the Oshkosh Land and Cattle Company.  They established their ranch headquarters near the present site of Oshkosh, Nebraska.

In 1889 the Cattle Company built a two-story frame building on the W1/2 on the NW1/2 of Section 36, Township 17 North, Range 44 West.  Thus began the town of Oshkosh.  This building contained the company store, a small area for a post office, another for a drug store, and still a third area for a bank.  Upstairs was a printing office and hotel rooms which later became living quarters for the merchant and post master.

The railroad reached Garden County in 1907, Oshkosh in 1908 and Lisco in 1909.  The first train arrived in Oshkosh August 8, 1908, and this meant "Grow" to the local inhabitants.  A brass band and a celebration marked the importance of the occasion.

As Oshkosh grew, streets became quagmires until in 1948 a "young" city council voted to pave Main Street.  West 2nd Street which was also state highway #27 was paved in 1952 with the state paying half the expense.  About every other year after that, additional streets or blocks were paved.

The locality of Garden County was a favorite hunting ground of the American Indians.  In the north part of the county there are scores of beautiful lakes while a little farther south lies the broad North Platte River which, throughout history, has been both a friend and an enemy to man.  Indian relics such as beads, stone axes, and arrowheads are found by the eagle eye of avid rock hounds and relic collectors.

In this Shangri La was found William Lisco (better known as Bill), one of the first cowboys to ride this range.  His first job here was in 1872.  Fifteen years later he took claim in the valley just west of the present line between Garden and Morrill counties.  Previous to 1885 Reuben (Rube) Lisco, brother of Bill, located on Rush Creek.

Plans of the Union Pacific Railroad included the building of a line on a water grade from North Platte to the Mountains.  This brought the first railroad to our North River Country.  1909 was an eventful year in the history of Lisco as it marked the birth of this little town.  The Union Pacific Railroad reached Lisco in the fall of 1908.  In 1909 the depot was built.  Mr. Ralph Cary was depot agent.  The same year Reuben Lisco laid out the village of Lisco.

On the completion of the railroad to Oshkosh in 1908, the people in the central and northern part of the county began to talk county division, since they were seventy-five miles from Chappell, their seat of county government.  Petitions for county division were circulated in 1909 and the issue was voted upon in the fall election and carried by an overwhelming majority.

Eugene Delatour, the county clerk, quickly issued the necessary documents that would divide the county.  The part north of the township fifteen thus became Garden County.  It is said that the county was so named in the hope that this land should become the garden of the west or with the allusion to the "Garden of Eden".  Oshkosh was named the new county seat as it was conveniently located in the south central part of the county.

The commissioners rented the lower floor of the Commercial Hotel for a court house.  They hired Mr. Day to transcribe the records from Duel County and built a temporary jail and a cement vault in which to keep their records.  Early in 1910 Oshkosh assumed the duties and responsibilities of the county seat of Garden County.

Although the county population is smaller, the community spirit continues to grow.  They are constantly faced with new problems but just as the hardy pioneers met their challenges, the people of Garden County will continue to meet theirs.