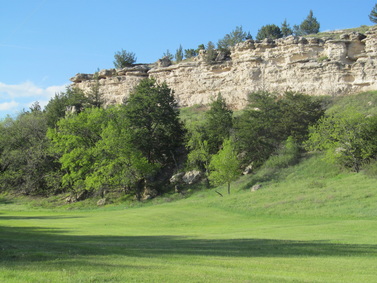 Pioneers began making the 2,000 mile long trek to Oregon in 1843, crossing the Missouri at St. Joseph, following the Blue River through Kansas and into Nebraska where they followed the Platte River.  Water was essential for the pioneers and their livestock so the Oregon Trail followed rivers the entire distance.

After the first easy 200 miles, pioneers crossed the south branch of the Platte River between what is now Brule and Big Springs and made a long day trip without water to Ash Hollow where they could lower their wagons into the North Platte River Valley.

California Hill:  Start your Oregon Trail trip at California Hill, located just north of Hwy. 30 on County Road West MN, five miles east of Hwy 30 and Road 207 junction north of Big Springs or 7 miles west of Brule.  California Hill was noted in many diaries as pioneers started the cross country path between rivers.  Go up County Road West MN one mile and find California Hill on the west side of the road.  Be sure and sign the guest book located in a mail box and walk up the hill to follow the Oregon Trail.  This is a good place to see Oregon Trail ruts which look like a dip in the landscape rather than a two-wheel-track.  Look for these swells throughout the trip that are relics of the road created by thousands of wagons, oxen and horses destroying the native grass and leaving bare dirt.

Leaving California Hill, drive back to the junction of Hwy 30 and Road 207 and turn right (north) and travel between five and six miles to see swells as they cross the wheat land.  Years past, farmers plowed up debris from the Oregon Trail.

At Hwy. 26, turn left (west).  Shortly after turning you will see a farm and directly past the farm to the west of the road is the path of the Oregon Trail as pioneers headed to a long stretch at the top of the bluffs to the top of Windlass Hill.  Follow down into Ash Hollow to the sod house and turn left (west) into Windlass Hill.  Constructed in 1867 for the Nebraska Centennial, this sod house is an authentic reproduction except for the rafters.  The Lewellen Lion’s Club has maintained the sod house for years.  Watch for rattle snakes who are sometimes known to inhabit the sod house.

Drive on up the hill to the faux wagon to read the signs and see where wagons came down the hill.  There are several places where swells can be seen on the sides of the hill.  In the fall these swells are easily identified as the grass turns red.  During the Oregon Trail era the native grass was worn away by wagons and animals and left bare roads.  These blew with the wind and left swells.  The grass that filled in on Windlass Hill was Little blue Stem replacing the Side Oats Gama that originally covered the hill.  The trails to the north that are two rut trails are recent trails from the local rancher.  At the bottom of Windlass Hill the pioneers followed along the sand draw bottom and valley towards to mouth of Ash Hollow where they camped.

The path to the top of Windlass Hill provides a great walk and view letting you see how the bluffs looked from the top.  This is a steep climb.  Sometimes people ask why the pioneers when down that hill instead of where the current road descends the hill.  The road grade was changed significantly for the modern highway and Windlass Hill was the best route down without rock ledges.

From Windlass Hill turn left (north) and drive about two miles to the gate of Ash Hollow State Historical Park.

Visitor’s Center:  Drive to the top of the steep hill and turn left to go to the visitor’s center where displays show the geologic, Native American and pioneer history.  Below the center is a covered cave with excavations of early Paleolithic tools.  The walk to the cave is steep and requires a certain level of fitness.  The sidewalk is wheel chair accessible but there are stairs in the cave building.

At the top of the bluff on the way to the visitor’s center, stop where parking is available and look along the river valley.  From here you can see the paths of the Oregon, California and Mormon Trails.  The Mormons mostly left from Council Bluffs, Iowa and so were on the north side of the river.  There were also violent incidents between Mormons and non-Mormons, so the north side provided some safety.  The early pioneers on the Oregon – California Trail heavily used the Ash Hollow path and then followed along the south side of the North Platte River below the bluffs into Wyoming.  In the final years of the Oregon – California Trail, pioneers could take the newly constructed Union Pacific Railroad to Omaha and then traveled by wagon on the north side of the river.

You can purchase a park pass at the visitor’s center.  During the winter, park passes can be purchased at the Oregon Trail Trading Post on the edge of Lewellen.

Rock School:  After the visitor’s center be sure to drive along the bluff to the far end of the road to the rock school.  Built in 1903 by the Clary family and other neighbors, it is made of stone quarried from nearby hills and laid in lime and sand mortar.  A nearby rancher donated the quarried lintels above the doors and windows.  This building replaced an older sod schoolhouse located east of Windlass Hill.  From five to twelve students attended this school in the years from its construction until 1919.

Below the visitor’s center is a picnic area and pond fed by a fresh spring.  To reach this area return to the bottom of the steep hill and follow the gravel road that goes north.  Note water crossing the road from a spring farther south in the hollow.  The pioneers camped in this area and throughout the bottom of Ash Hollow.  They only had river water to drink and had not seen trees for about 200 miles.  The trees and clean water in Ash Hollow were a delight.  The pond at the end of the parking area is a man-made pond from 1979.  Trail swells can be seen along the valley and approximately the course of the power poles.  Note the area that is tall grass between the parking area and the bluff.  At the top of the bluff is a single rock which may be the one referred to in a diary as a ram’s head.  A walking path is available around the pond and along a sharp incline to the visitor’s center at the top of the bluff.  Another walking trail can be found by parking in the parking area, walking back along the gravel road and along the bluff.  A walking trail sign marks the entry to this area.  The walking path splits into several trails.  Explore or always take the left side to end up at the rock school.  This is about 1 mile from the parking area to the rock school.

WALKING PATHS:  Our favorite walk in Ash Hollow is about 3 miles round trip and includes some steep hills.  Park at the Visitor’s Center and walk down the sidewalk from the cave trail to the pond at the bottom of the bluff, along the pond and to the parking lot.  From there follow the gravel road and cross the paved road going south.  A walking trail sign marks the entry to follow along the bluffs.  The trail has several options worth exploring, but staying to the left side of the trail will get you to the location of a trading post which pioneers found on the trail and shortly after that to the rock school.  This lower part of the path is on the Oregon Trail.  From the school walk up the paved road and along the bluff back to the visitor’s center.  The view at the top is spectacular.

Bluff Walk:  A new path has been developed from the parking spot before the visitor’s center.  This is a 1 mile walk round trip to the point of the bluff overlooking the river valley.  An easy walk with little incline, the view is spectacular.  At the end of the walking path is a dip in the ground which is almost certainly a grave and could be a pioneer grave but is guessed to be the grave of the fifth soldier who died from wounds at the Massacre of Blue Water.  He would have been tended at Fort Grattan located just below the bluff.

Caution:  There are various kinds of snakes in Ash Hollow including rattlesnakes so it is safer to stay on the trail.  Never step, walk or put your hand where you haven’t looked first!  If you see a snake, stay back and walk well around the snake and continue on your walk.

Ash Hollow Cemetery:  After leaving Ash Hollow State Historical Park, turn to the right (north) and follow to Ash Hollow Cemetery.  In 1852 Ash Hollow was the scene of a cholera epidemic.  One of the few marked graves, Rachel Pattison, a new bride, “took sick in the morning and was gone by night.”  Her grave is on the northeast corner of the cemetery (right side, close to the directory.)  Her husband, Nathan, stayed over to carve a stone risking being left behind on the trail and facing dangers alone.  Recently, a descendent of Nathan’s brother came to Lewellen and said that Nathan never remarried.

Drive the Oregon Trail:  Immediately upon leaving Ash Hollow cemetery turn left (west) on the gravel road before the river.  This road follows the Oregon Trail and will take you past large rocks on the south side of the road and about 20 feet up the hill where it is believed that four soldiers who died in the Battle/Massacre of Blue Water were buried.  At the junction turn north and drive across the one-lane truss bridge into Lewellen.  This bridge is one of the few remaining truss bridges in Nebraska and was built in 1937.  The gravel road along the bluff turns south and goes back up onto the table land.  The part along the bottom goes into private land and does not go through to Oshkosh.

From Lewellen, follow Hwy. 26 for 1 ½ miles to the Blue Water Historical Marker.  The actual location is on private land and not accessible but look to the north horizon to a small bluff separate from the hills.  The massacre covered an area from that bluff several miles to the east.

Driving on along Highway 26, you will be on the Mormon Trail and the final years of the Oregon-California Trail.  South of Oshkosh the John Hollman Grave Historical Marker can be found just south of the river at the first gravel road going west.  To the east is the Oshkosh Country Club where you can golf the Oregon Trail.  The gravel road at the John Hollman Grave marker is a through road to Lisco if you want to drive on the old Oregon Trail for 16 miles.  The road has many bends and should be taken at slower speeds.  The alternate and easy route is to follow Hwy. 26 to Lisco.  Just west of Lisco a Mormon pioneer noted the frog-head bluff.

Leaving Garden County, you may continue on Hwy. 26 to see the sites often noted in pioneer diaries - Court House and Jail House Rock and near Bayard, find the famous Chimney Rock landmark with an excellent visitor’s center.  Scottsbluff National Monument west of Gering. 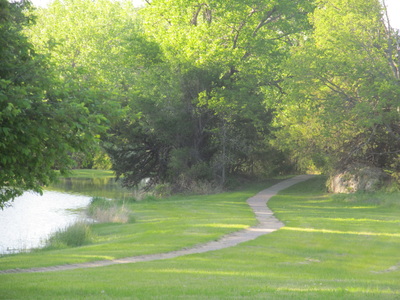 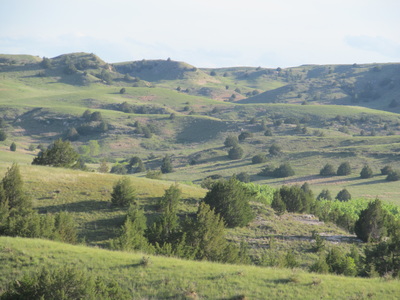 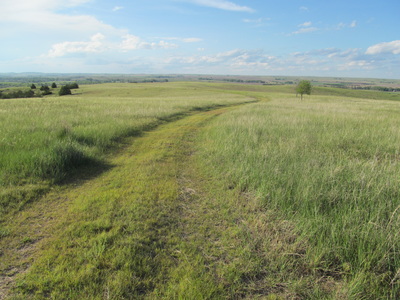 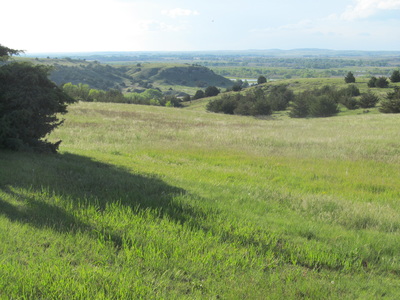 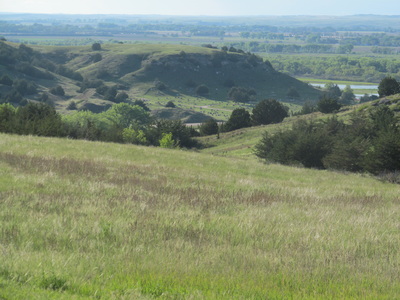 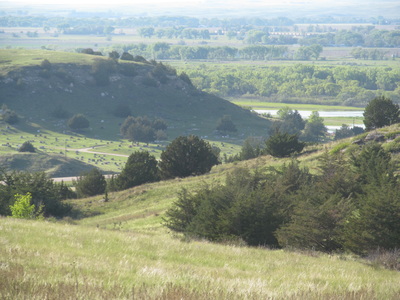 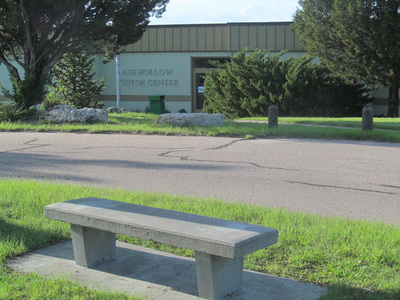 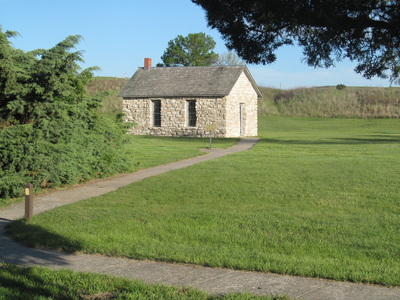 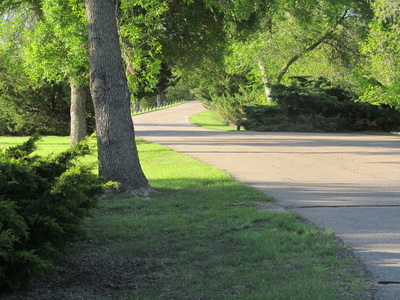 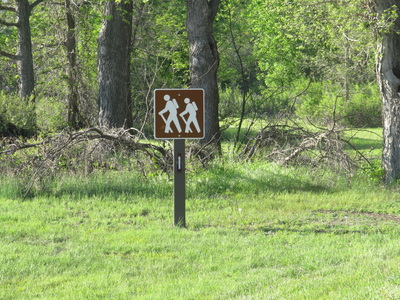 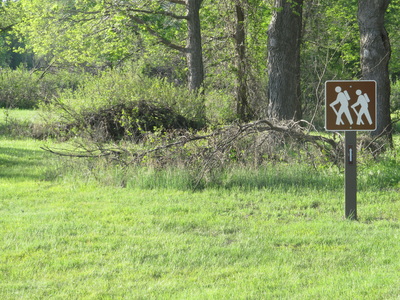 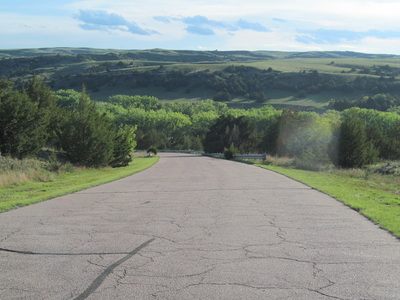 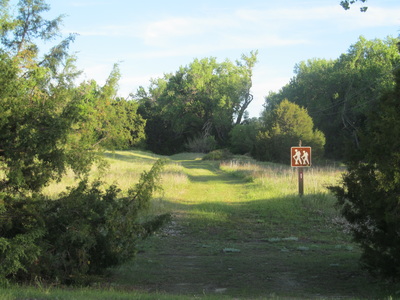 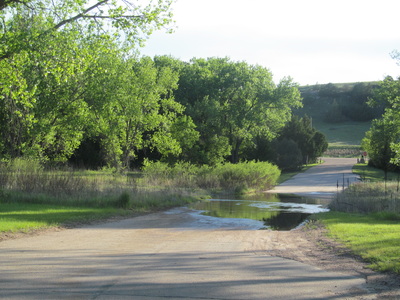 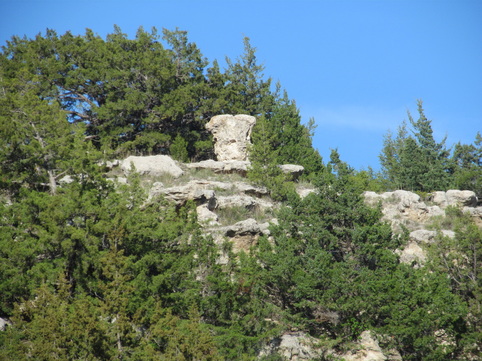